This website shows my arts related projects only and is not updated anymore.

Since 2012 I am working on projects in (scientific) research.

Design and fabrication of:

I am working on a new website that showcases my projects in research.

In the meantime please browse to my Linkedin for reference or to get in contact.

Chalky was guest at Tinta, a comic arts festival in Lubljana in 2017. 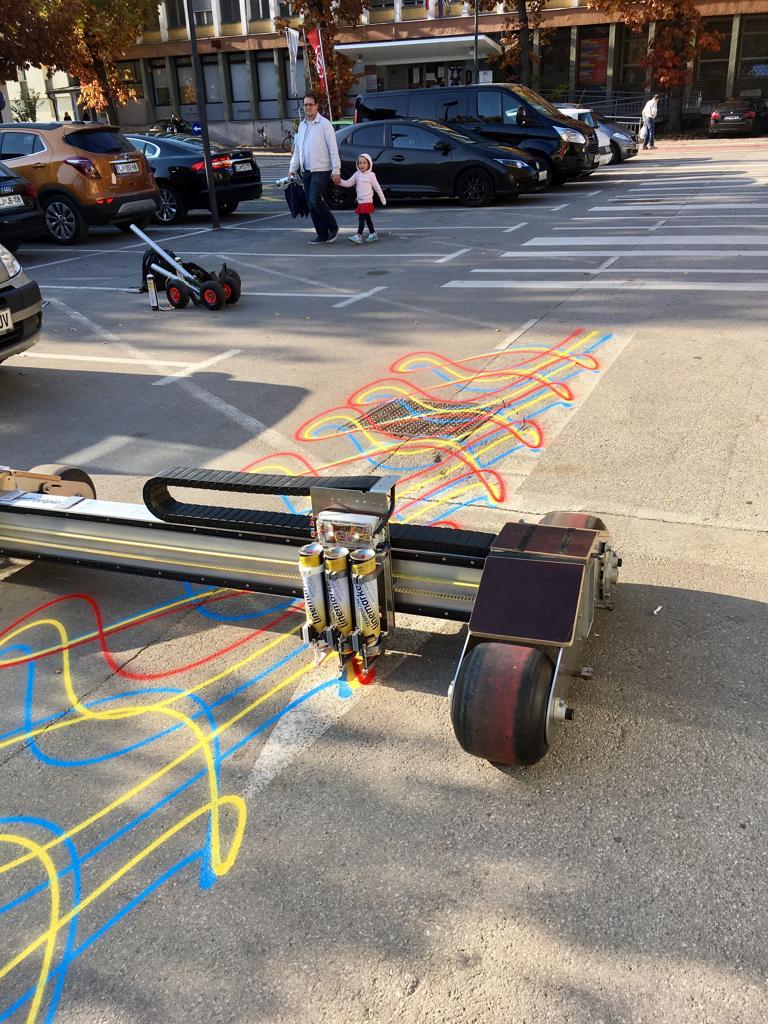 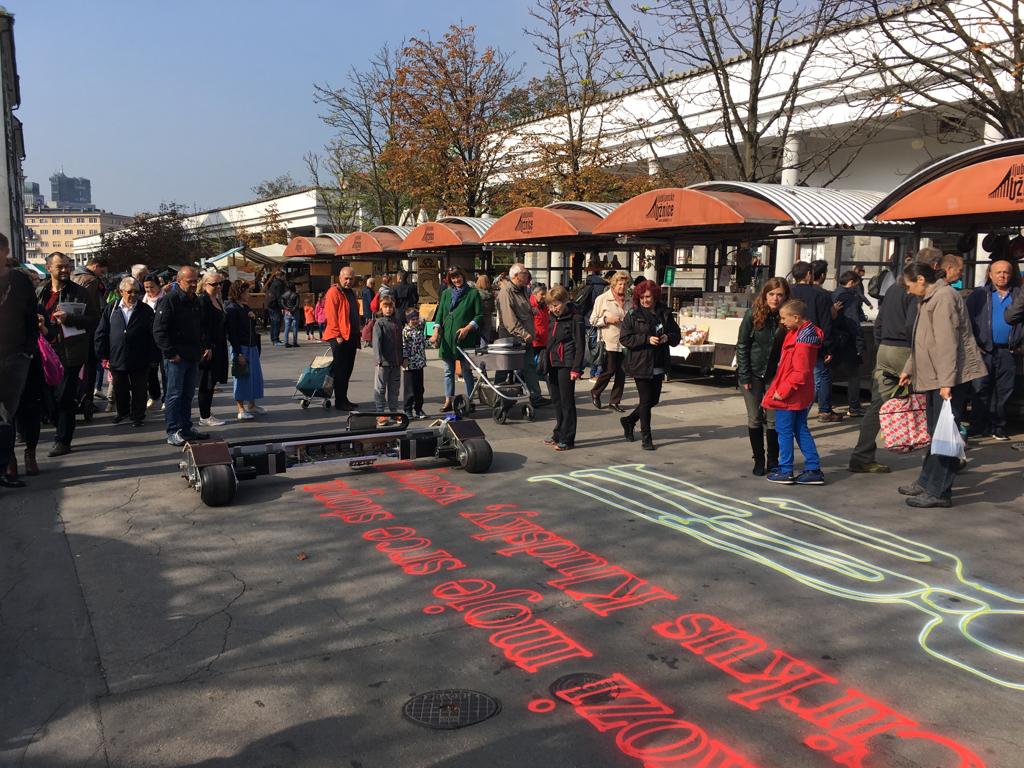 Al the content came from local comic artists. Chalky has been plotting their stuff all over town.

Drop is an artpiece, which can be categorized as an installation. It is based on the optical effect of drops “floating” in free space. This effect is made by synchronizing falling waterdrops with a flashing light.

From the 29th of july until the 3rd of august I will be at the Kröller-Müller Museum with my latest project PaintR. The project is initiated by Daan Brinkmann. We have developed, designed and built the machine together. Daniel Berio is responsible for programming.

In practical terms, the machine can be described as an "80s style pen-plotter on wheels", using paintbrushes instead of pens.

In artistic terms, the machine is an attempt to blend digital and analog imaging techniques, using public space as a canvas. 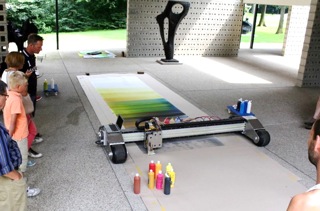 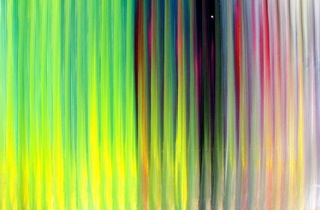 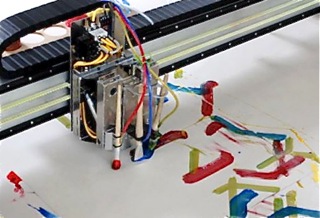 Gradually my musical sireninstruments are evolving into versatile and well playable instruments. Simple to set up, simple controls and complete control in tune / volume / oscillation and more. 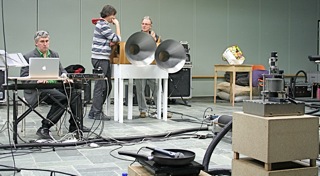 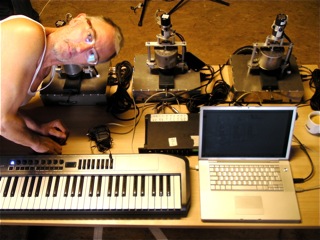 Since the beginning of 2011 I am working with artist collective The User, based in Montreal, Canada.

I am engineering the mechanical structure of a new piece of art called: "Portrait Landscape Machine"

The goal of this piece of art is to print sculpted faces, only using sand and water.
In December 2011 we delivered proof of concept by finishing a working prototype. 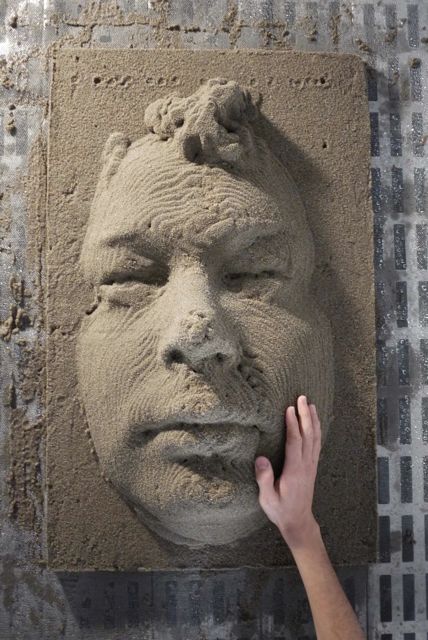 I developed a tool fo Letman last year, the Rainbowgun, allowing the user to paint with 7 spray-cans simultaneously. 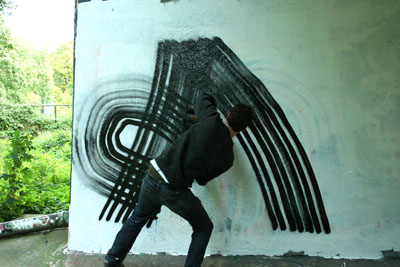 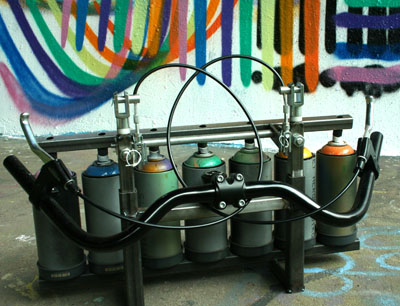 Check it out in this remarkable performance, made for: If you could collaborate

For Lustlab and Pieke Bergmans I engineered and built two robotic lights. They express 80 different emotions with their body, based on Twitterfeeds and breaking news...

While they were showed at the Centre Pompidou from May to August 2012, Lamp 014 sensed feelings in the vicinity of Paris while Lamp 015 detected worldwide opinions about current significant wikipedia topics. 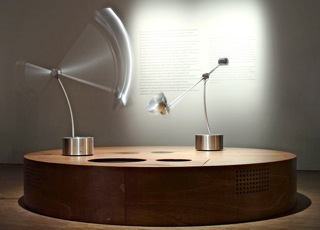 I rebuilt Ideofoon 1 by Dick Raaijmakers . The project is commissioned by the Witteveen+Bos Prijs.

The artwork was created by Dick Raaijmakers in 1970 and is considered lost. Hence the build of this replica.

Descripition:
Ideofoon 1 is an installation with 36 speaker which produce their own sound. Caused by shortcircuits, gravity, bouncing chrome balls and more. Materials are: various types of metal, wood, electronics and mechanics. 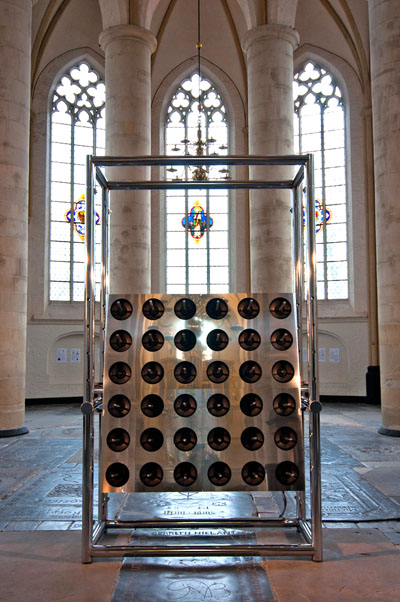 In collaboration with Theun Mosk I built 5 identical light objects. They are triangular, having 3 panels with different textures. The lights are moved and turned on stage by the musicians. The first appearance was December 16th: "Dutch Design” by Asko|Schönberg in Muziekgebouw aan ‘t Ij in Amsterdam… It was a great night. 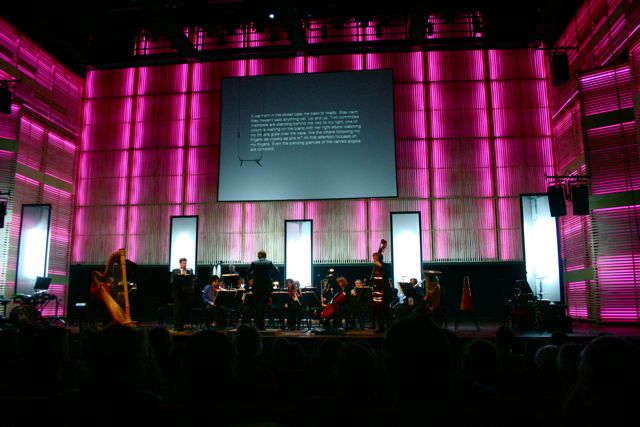 As part of a research in the origin in electronic music, I developed and built a variety of instruments based upon historical information and patents by scientists and musicians. Among them are Hermann Helmholtz, Luigio Russolo and Henri Naber.

The most advanced instrument is my interpretation of the Helmholtz Doppelsiren.
An instrument he used extensively to prove sound theories.

I prototyped a working instrument and then redesigned parts, based on the prototype. For production I seeked collaboration with a CNC-machining company; Rijfers Metaalbewerking in Alphen a/d Rijn.
High precision is critical. For musical variables, like pitch, timbre, volume, harmonics, interference and more. But precision is also important for the ability to reproduce the same sounds with the siren-instrument, over and over again; studying the instrument.

The instruments are used in a variety of concerts, theaterpieces and workshops. They are a part of the Siren Orchestra of theater ensemble Veenfabriek. 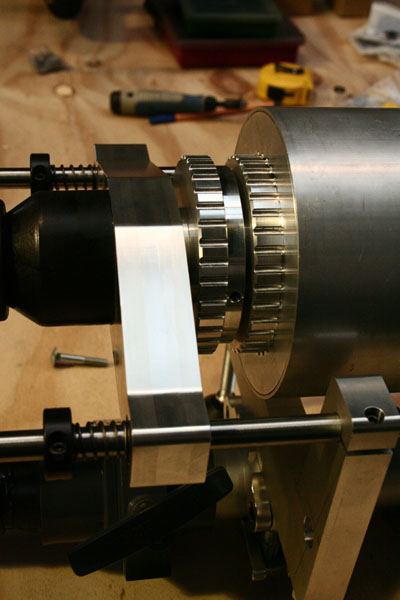 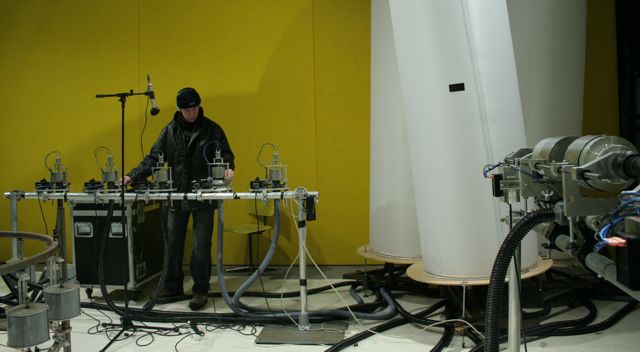